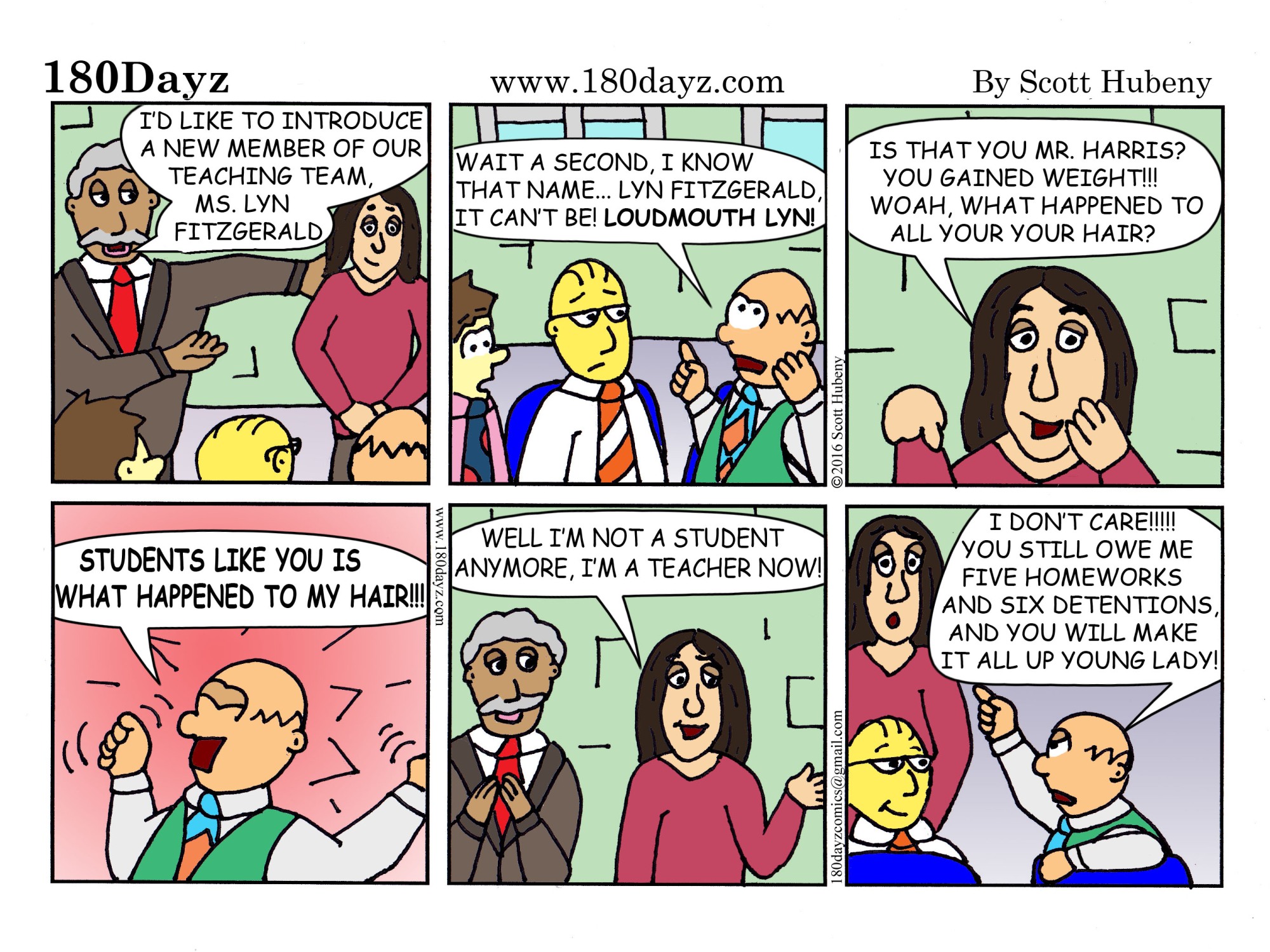 Many teachers have had to endure that strange twilight zone type experience of teaching at a school where they once were a student. Below, Ms. Fitzgerald’s shares her story of one such occurrence.  Share your teacher story, and it too to can become a 180 Dayz cartoon! https://180dayz.com/180dayz-new-teacher-book/

When I first started my teaching career I obtained a position at the same middle school I use to attend. The school had hired a new science department head that year, and they had arranged for content wide meeting for all the 6th, 7th, and 8th grade science teachers. When I stepped into the room where the meeting was to take place, I found that I immediately recognized two of the educators that were present. They were my former teachers! Not sure if they recognized who I was, or even remembered me, I introduced myself and we exchanged professional pleasantries. I avoided the little detail that they had once been my actual teachers when I was younger (for reasons that will become obvious later). I managed to escape that meeting unscathed, but unfortunately not for long, for at a preceding meeting my department head (who had somehow acquired this highly classified information) announced to one of the individuals that I had been their student when I was in the eighth grade. This was all the revelation she needed, and she instantly remembered me as the immature (and possibly borderline obnoxious) preteen I was many years ago. Before I knew it, my prepubescent exploits were being showcased like the headlines from a cheap tabloid, with special emphasis given to the fact that in class I would ‘never shut up.’ She continued to roast me before the captive audience of my peers, stating, “When I saw you on the first day of school, you looked like such a sweet girl. I thought to myself, oh, isn’t she a nice kid? But no! You weren’t! You NEVER stopped talking… ever!” Perhaps I should have been embarrassed, but all I did was laugh. My department head was shocked and asked, “Is this true, Lyn?” What could I say, it was! What I learned from this experience is to never take a teaching position at a school that your were formerly a pupil. Just kidding! What I really learned was two things:
First, when your students acting immature and driving you crazy, think back to how you use to be when you were younger. Recognizing that they are just kids, and that you were a funky little runt at one point yourself, just may give you a bit of understanding and empathy that will help you keep your cool and deal more civilly with their behaviors.
Second, as a classroom teacher you are bound to run into some embarrassing moments. If you learn to have a good laugh at your own expense every now and then, are able to swallow your pride and let such things roll off your shoulders, you will ensure both your happiness and longevity in this profession!

Search for Comic by Keyword/Tag